This recipe is my homage to a specific food-related memory I have from the Little House on the Prairie television series. Remember the lunch buckets Ma sent to school with Mary and Laura? The props masters chose tin buckets, covered with a piece of cloth. A strange, food-obsessed child, I always wondered what a mother in that era would have packed in a bucket! Then, during one episode, I remember Laura plops herself on the steps of the school house and pulls out… a piece of fried chicken.

In “These Happy Golden Years”, Laura writes about a dinner of fried children served with the first new peas and potatoes of July. The acid-saltwater bath, originally a butchering practice, makes a beautiful brine that adds juiceness to the meat. I used chicken tenderloins because they cook more evenly, but you can certainly use any cut of the bird, with or without bones, including pieces of whole chicken.

You may be tempted to add spices to the flour-don’t. Shake and Bake has sold us all on the false notion that the breading makes the fried chicken. The real flavor comes from the meat and the fat-and this recipe ensures that both of those elements are top quality!

First make a brine with salt and vinegar… 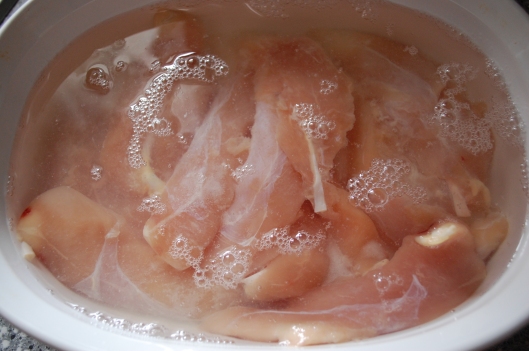 Then cover it with water and let it stand in the frig for at least an hour.

Once the fat is hot in the skillet, dredge your chicken through plain flour and fry! 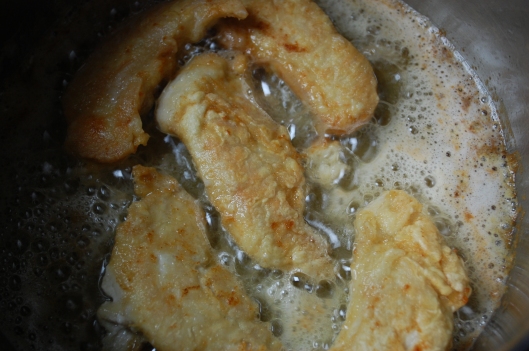 KFC doesn’t have anything on Ma Ingalls!

At least one hour before frying, put the chicken pieces in a large bowl with a cover. Sprinkle the salt and vinegar over the pieces and then cover them with cold water. Place in refrigerator and let stand until it’s time to fry.

Place flour in a pie pan and heat the fat (butter, shortening or oil) in a skillet over medium heat until it’s hot but not smoking. Meanwhile, drain the chicken pieces on a paper towel. When the fat is ready, dredge the chicken through the flour and then place in the skillet. Fry until the pieces are thoroughly browned. My tenderloins took five minutes on each side-larger pieces, especially those with bones, will take longer. If you are doing larger, bone-in pieces, once they’ve browned you can reduce the heat and simmer the pieces with a lid in the skillet another 10-15 minutes until the meat is no longer pink OR you can transfer the pieces to a baking dish and bake them at 350 degrees for 15 minutes until they are cooked through. 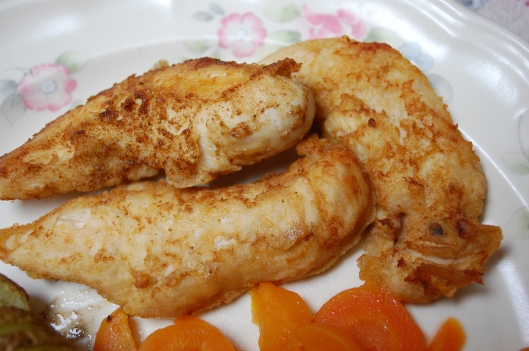 5 thoughts on “Little House on the Prairie: Fried Chicken”