Confession: I made this cake because 1.) I had literally 1.5 hours until I had to leave for a serious round of holiday parties and 2.) burnt sugar is in the title. How could I resist?

When I’m in need of something unusual, I turn to one of my Local 12 parting gifts-a fantastic cookbook called A Thousand Ways to Please a Husband; The Romance of Cookery and Housekeeping. That’s right ladies… cooking and housekeeping are romantic. Published in 1917, it tells the story of Bettina and Bob’s first year of marriage through a series of special events and the meals that Bettina cooks. (Also found in this cookbook was this Deviled Eggs recipe which was divine. No kidding.)

This is fast cake with a mild taste. Turns out that one of the guests at one of the parties I attended that night remembers this cake from her childhood. Her mother baked it for her every birthday. I love when food leads to memories like that, don’t you? 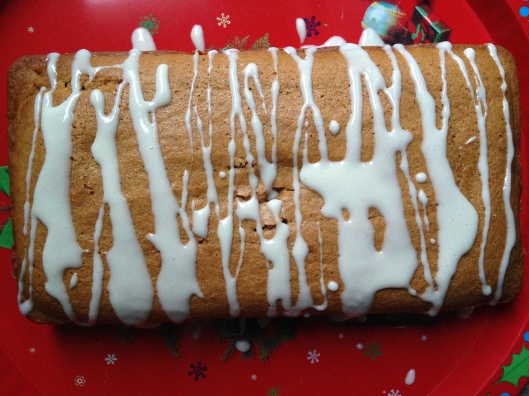 Pour 2/3 cup of the sugar into a non-stick skillet and heat over medium, stirring constantly, until the sugar melts into an amber-colored liquid and there are no lumps. Add the boiling water and stir thoroughly. Set aside and allow to cool.

With an electric mixer, cream the butter. Add the remaining sugar and egg yolks and mix thoroughly.

Pour the mixture evenly between the two loaf pans and bake at 350 degrees for about 40 minutes or until a toothpick inserted in the middle comes out clean. 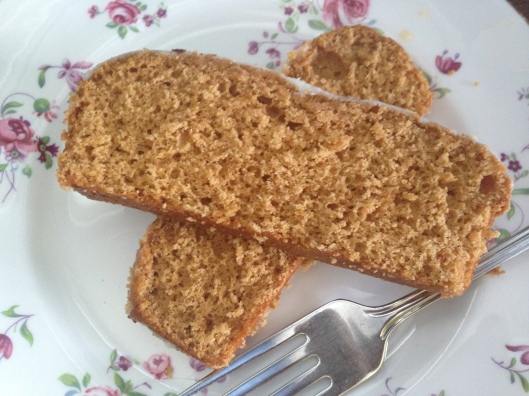 Allow to cool and top with drizzles of icing of your choice!

I recently volunteered to help provide food for my church’s Coffee Hour-a time in between services where the congregation can socialize over percolated java and a wide variety of baked goods.  Sounds like heaven, right? I volunteered for two big reasons. I love to bake-and I love to test some vintage recipes before a larger crowd than my normal circle of family and co-workers.

So last Sunday, I brought three trays of goodies-a very modern white chocolate chip oatmeal cookie and a flourless chocolate cookie, plus a big tray of vintage coffee cake. I liked this recipe because it’s not anything like the modern version of coffee cake-which often resembles a giant sticky bun, covered in cinnamon, brown sugar and glaze and usually topped with nuts-not that there is anything wrong with that kind of cake!

I thought I’d do a little research into the genre. Foodtimeline.org says that in his book, Listening to America, “Stuart Berg Flexner claims it wasn’t until 1879 that the term “coffee cake” became a common term. Historic American cook books and newspapers support this claim.” Their research, and my own, seems to suggest that until 1890, most recipes were like the one I baked-heavy on molasses as a sweetener and including a large amount of coffee as the liquid. Just before the turn of the century, we start to see recipes that transition to include more sugar, some cinnamon, and in some cases yeast. The evolution appears to be from a cake that *contains* coffee to one that is *eaten* with coffee.

For fun, I invite you to try this recipe-the granddaddy of coffee cake! It comes from the Cloud City Cookbook, published in 1889. It appeared to go over well with the church crowd… when I came back to clean up, a trail of crumbs were left on the tray.

This recipe is super easy. You just put a bunch of ingredients in your bowl and mix!

Preheat your oven to 350 degrees. Grease two loaf pans and set them aside.

Divide the batter between the two loaves. Bake for 50 minutes or until a toothpick inserted into the center comes out clean. Allow to cool completely.

When the loaves are cool, make the frosting by mixing the powdered sugar, vanilla and 2 tablespoons milk in a small bowl until smooth. If the frosting is too thick, add the extra milk by the tablespoon until its pour able. Pour the frosting over the two loaves and allow to harden.

Cut and serve with coffee! Enjoy!